When you really, really need a rugged Mobile Computer for the Factory or Warehouse.

There are many industrial mobile computers and terminals on the market and many "claim" to be fully rugged and fit for industrial use.  But there's rugged, as in "its a lot better than a mobile phone" and then there's really rugged, as in designed from the ground up to be capable of standing up to the harshest manufacturing, warehouse or logistics set-up.

When the MC9090 was introduced in 2008 it was an instant hit with many large businesses running large ERP systems such as SAP and Warehouse Logistics operations.  The MC9090 redefined the Rugged Mobile computer and its a testament to their ruggedness and reliability that some units are still being used today.
The MC9300 (Android) is the latest evolution of that original concept, a hand held device that is over engineered for very active use, while still ergonomically designed to allow optimum performance for the worker.  In addition the Latest MC9300 uses an Enterprise version of Android to power through the ERP or WMS interface and provide a level of security not seen on other competing units.
Why Android?  Well its simple really, its because Microsoft retired hurt from the industrial mobile operating system market which is had dominated for years. Microsoft did not do well in the mobile phone market and so decided to abandon its mobile phone OS platform which left industrial device manufacturers with little choice but to move to Android. Read our Blog on "The bitter end for Windows"
Zebra Technologies were the first of the manufacturers to adopt Android and quickly realised that a "standard" version of Android would not be suitable for most corporate customers and so Zebra worked with Google and others to re-engineer a much more robust Enterprise version of Android that deals with all the security and operational issues that large corporate customers were concerned about. 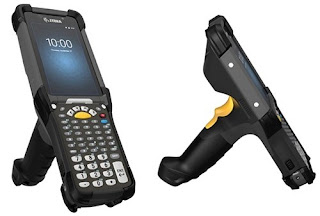 So now in the MC9300 you have the perfect combination of robust construction, ergonomic design, lightening performance and secure operation that makes the MC9300 truly rugged and ideal for use in our high speed, deliver it tomorrow world.
Watch this video for a 90 second overview of why its the perfect rugged mobile computer for your business.
Posted by Barcode-IT at 11:48 No comments: